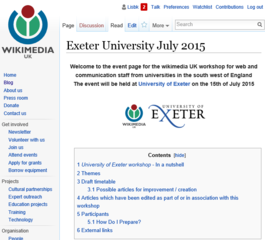 This guest post is by Brian Kelly and was originally published here. Re-used with kind permission.

Areas Apparently Not Being Addressed By Web Managers

Recently in a post entitled “Pondering the Online Legacy of my Work” I described how two recent Facebook messages highlighted areas which appear not to be being addressed widely across the web management community. The post looked at how web content may be deleted after content creators leave the institution, meaning that the content creators, who are likely to care about the resource, are unable to exploit the resources unless they have migrated the resources before leaving.

This post was inspired by a Facebook update from Rod Ward who alerted my to a workshop on use of Wikipedia which he helped facilitate at the University of Exeter.

Rod’s Facebook post provided a link to the entry on the Wikimedia UK Web site about the workshop which was held at Exeter University  on 15 July. As shown in the screenshot the event was aimed at web and communication staff from universities in the south west of England.

I’ve a long-standing interest in Wikipedia, and last year published posts on “Librarians and Wikipedia: an Ideal Match?“, “#1amconf, Altmetrics and Raising the Visibility of One’s Research“, “Top Wikipedia Tips for Librarians: Why You Should Contribute and How You Can Support Your Users” and “Supporting Use of Wikipedia in the UK Higher Education and Library Sectors“.

As suggested by the title of these posts my main target audience for the posts were librarians and researchers. Members of university web and marketing teams would not be likely, I felt, to have responsibilities for managing Wikipedia articles. However from seeing the details of the recent workshop it seems that I was mistaken, with several of the participants working for university marketing teams.

But should people who work for marketing teams update Wikipedia articles about their institutions? In a post on “Wikipedia, Librarians and CILIP” I flagged the dangers of this:

“[In a talk to librarians] I pointed out the Wikipedia neutral point of view (NPOV) principle which means “representing fairly, proportionately, and, as far as possible, without bias, all of the significant views that have been published by reliable sources on a topic“.

One way of minimising risks of sub-conscious biases in articles is to ensure that content is provided by those who do not have direct involvement with the subject area of an article. For an article about an organisation it would therefore be appropriate for an article about CILIP should be updated by editors who are not employed by the organisation.

Rod Ward, one of the facilitators at the recent workshop, proposed one mechanism for addressing this tension: he asked participants at the workshop to include the text on their Wikipedia user profile page:

I am username. I work for organisation as job title. Part of my role is to improve the Wikipedia articles about academics of my employer. I have attended a workshop where policies about the Neutral point of view, Biographies of Living People, Conflict of Interest and Paid Editing were discussed. I am aware of potential conflicts in this area. If you see any issues with my editing please contact me via my talk page.

This seems to me to be a sensible approach to addressing the NPOV principle: there may be factual aspects of Wikipedia articles which would be improved in a timely fashion if updated by staff working for the institution. For example, looking at the updates made two days ago to the University of Exeter article we can see that the updates are factual updates to the Medical School. These updates were made by user SallUEMS whose user profile states that the user “work[s] for the University of Exeter as a Web Marketing officer“.

There will be a need to ensure that updates to Wikipedia articles are made in an ethical fashion, to avoid updates being reverted and to avoid the risks which politicians, political researchers and PR staff in Westminster have experienced as described in an article on “15 Embarrassing Edits Made To Politicians’ Wikipedia Pages By People In Parliament“.

In September I will give a talk on “Developing an Ethical Approach to Using Wikipedia as the Front Matter to all Research” at the Wikipedia Science 2015 conference. I’d be interested in hearing if any institutions have developed guidelines on updating Wikipedia articles related to activities carried out in the institution. It does seem to me that marketing staff would benefit from having policies and guidelines which they can use. There may be temptations (and pressures from senior managers) to remove embarrassing content – and yes, there are negative comments about vice-chancellors which have been published in national newspapers which could be cited!

The higher education sector should avoid the risks of seeing headlines such as “Wikipedia Pages of Star Clients Altered by P.R. Firm” in which a founder of the PR company Sunshine “acknowledged that several staff members had violated the terms of use by failing to disclose their association with the firm. Mr. Sunshine said a key employee in his web operation was not aware of Wikipedia’s new terms“. Interestingly, after being caught for “play[ing] loose with Wikipedia’s standards and violat[ing] the site’s updated terms of use agreement, by employing paid editors who fail to disclose their conflict of interest on the website” the PR company now requires “all employees who edit on Wikipedia have now disclosed their affiliation with Sunshine”.

This approach is aligned with the suggestions made at the recent Wikipedia workshop at the University of Exeter: if you do update articles in which there may be a conflict of interest ensure that you are open about possible conflicts of interest and invite feedback from those with concerns.

However there is a need to go beyond this simple approach. And I wonder if the higher education sector could learn from the approaches taken in the PR sector. In a post on Links From Wikipedia to Russell Group University Repositories I highlighted challenges for universities which may be tempted to seek to exploit the SEO benefits which links from Wikipedia to institutional web pages may provide. In the blog post I cited an article from the PR community who had recognised the dangers that PR companies can be easily tempted to provide links to clients’ web sites for similar reasons. In response to concerns raised by the Wikipedia community Top PR Firms Promise[d] They Won’t Edit Clients’ Wikipedia Entries on the Sly. The article, which is hosted on Wikipedia, describes the Statement on Wikipedia from participating communications firms which was published in 10 June 2014:

Might universities find it useful to embrace similar principles?